Last week Boris Johnson conducted his first cabinet reshuffle as Prime Minister. Cabinet reshuffles always attract the attention of the press, but they are rarely dramatic with most senior ministers staying in their posts. The recent reshuffle broke with that tradition with the resignation of Sajid Javid as Chancellor (ostensibly due to Number 10’s desire to sack the Chancellor’s special advisors) and the promotion of his deputy, Chief Secretary to the Treasury Rishi Sunak.

With mere weeks until the Budget, Mr Sunak faces a daunting task to form and articulate the Government’s fiscal policy for the next year.  But he also has an opportunity to reset priorities and pivot expenditure to meet the government’s policy agenda.

Implications for the Budget

We do not claim to know the exact contents of the Budget, but Javid’s removal and Sunak’s elevation will have implications for the UK’s fiscal landscape. Sunak’s appointment has coincided with the establishment of a joint Treasury policy unit, which will report directly to Number 10. This will create a cohesive relationship between the Chancellor and his boss, prevent hostilities from arising and lead to better governance.

Imminent changes to the Treasury’s Fiscal Rules are expected. The rules have been repeatedly changed to reflect the spending priorities of each government. The present version of the rules originated during Javid’s occupancy of Number 11. They limit public sector net investment below 3% of Gross Domestic Product (GDP), prevent the government from borrowing to fund day-to-day spending and commit the government to reduce the UK’s national debt.

The Conservatives electoral spending promises do not conflict with these requirements if extra revenue is raised to offset an expansion in overall expenditure, or spending is reallocated from other priorities. However, it is unclear whether the government will exhibit the same fiscal discipline of its immediate predecessors. We examine some of the possible spending pledges that could be announced on the 11th of March.

Previous Chancellors have traditionally kept their exact budgetary proposals under lock and key, occasionally surprising observers by producing proverbial rabbits from hats. Nevertheless, taking manifesto commitments and public statements from ministers into account, we will probably see spending above last year’s expenditure of £842 billion. Unless the government raises more revenue through higher taxes, this will likely require further borrowing.

Increased public spending can produce advantageous economic outcomes. A school of economics known as Keynesianism states increased fiscal spending can increase demand over the short run and produce higher economic growth. However, not all public spending is alike and there is a qualitative difference between borrowing to invest in areas such as infrastructure and borrowing to cover general government spending. Likewise, the original theory envisioned debt-fuelled spending should only occur in periods of recession, not at the top of an economic cycle.

Advocates of debt-funded investments in public services could quite reasonably point to low-interest rates as a reason to raise spending. Yields on 10-year UK gilts currently hover around 0.60%, which means the UK government can borrow to invest at low cost.

It is important to remember the value of the UK’s total public debt amounted to around 85% of GDP at the time of the last budget; £1.8 trillion in monetary terms. The chart below depicts the level of the UK’s national debt as a percentage of GDP.  Prior to the financial crash in 2008-2009, the level of national debt never exceeded 40% of GDP. During the Great Recession, the size of the economy fell and public spending increased, pushing the debt to GDP level up to 65%. It subsequently reached a peak of 87% in 2017 before declining. 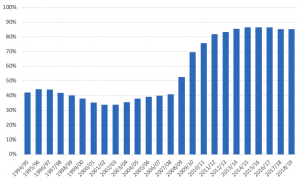 Source: Office for National Statistics, data as of March 2019

Like all debts, interest must be paid to investors. According to the Office for Budget Responsibility, the monetary value of the UK’s debt interest amounted to £41.6 billion in 2019. The entire UK defence budget amounted to £40.2 billion over the same period.

Some loosening of the fiscal strings could produce benefits for the UK economy. Infrastructure spending has the potential to boost overall productivity, and increasing broader expenditure could alleviate some pressures on public services. But, given the overall level of debt, a vast expansion in expenditure is unwise.

We are unlikely to see a significant jump in overall levels of spending. The fiscal rules will not be scrapped. Instead, they will be reformed to allow a marginal rise in expenditure and bring forward some investment and delay the requirement to balance the books by a few years. Additionally, the present low yield environment will give the government the ability to deploy fiscal stimulus at a low cost, providing an overall boon to economic growth.